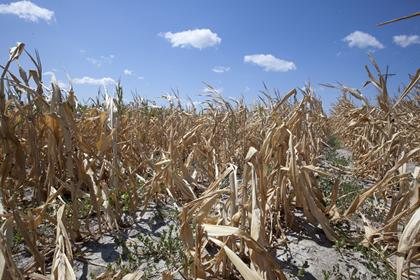 This summer’s U.S. drought, the worst in decades, is damaging corn crops used to produce ethanol, disrupting energy deliveries and threatening thermoelectric power plants, according to federal data this week.

Less than a fourth, or 23%, of the nation’s corn crop is now rated as good to excellent, down from 66% in June, reports the U.S. Department of Agriculture. A significant share of field corn (35% in the 2010 to 2011 harvest season) is used to make ethanol, which is blended into gasoline and accounts for about 10% of all motor gasoline.

Not surprisingly, the production of ethanol sank in July to its lowest level in two years and its prices rose. The USDA reports that 85% of the U.S. corn crop is located in drought areas of the Midwest and Great Plains, nearly half of which are suffering extreme or exceptional conditions.

That’s not all. The drought, considered the worst in decades as measured by the U.S. National Oceanic and Atmospheric Administration, is disrupting the deliveries of petroleum and coal that are carried by barges on the Mississippi River. The U.S. Army Corps of Engineers has reported groundings of traffic along the river because of low water depths. 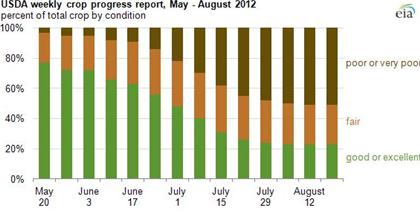 CAPTION
By U.S. Department of Energy, based on USDA data

The power sector is also affected. Higher temperatures boost demand for electricity to cool homes and businesses, but lower water levels can affect the operation of thermoelectric power plants, reports the U.S. Department of Energy.

What does this mean for gas prices? While ethanol prices have increased from $2.10 a gallon in late June to $2.59 per gallon as of August 28, DOE sees no “discernible pass-through pressure” on retail gas prices — at least not yet.

There’s little relief in sight, according to NOAA’s Climate Prediction Center which expects drought conditions to remain mostly unchanged through the end of November.