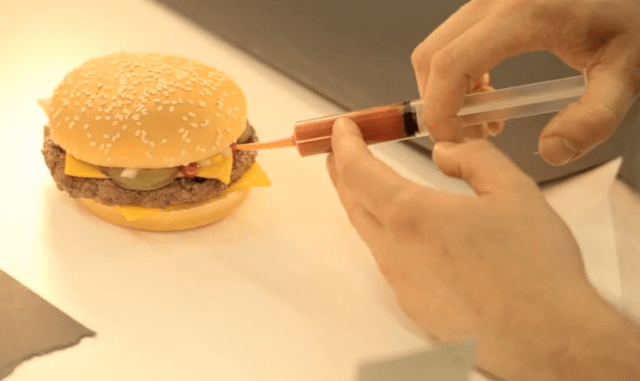 But there’s a school of thinking that says Web video ads should be their own special thing that takes advantage of the freedom and flexibility that the Internet offers.

And, weirdly enough, lots of people keep pointing to the same clip as an example: A three-minute-28-second mini-documentary from McDonald’s Canada, which explains why the chain’s burgers look better in ads than in real life. (Spoiler: They cheat.)

Last week, before YouTube’s big “brandcast” pitch for advertisers, I met with a bunch of people who are betting big on Web video, and they cited this ad as an example of Web advertising’s future. Then, at YouTube’s event a couple hours later, content boss Robert Kyncl said the same thing onstage. And this morning, BTIG analyst Rich Greenfield makes the same assertion in a research note (registration required).

So here you go:

Scintillating? Nope! And you can certainly think of other Web ads that were a lot glitizer, and got a lot more press. But it takes a lot of money and resources to get Jeff Gordon in costume and behind the wheel, or to drop a dude out of a spaceship. And there’s no way advertisers can treat each Web spot like a summer blockbuster.

Meanwhile, McDonald’s modest ad tells a story, flatters viewers by telling them they’re smart enough to go backstage, and still ends up pushing pretty images of hamburgers in front of them. That’s pretty clever advertising sort-of masquerading as something else but not really.

And people seem to like it: Since last June, it has racked up nearly 8.5 million views.