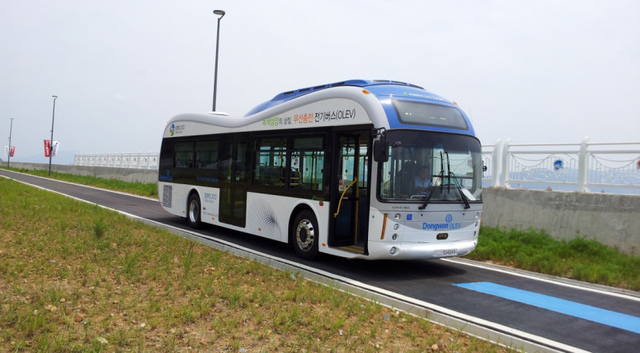 Wireless charging hasn’t quite yet made an impact in the smartphone market but that hasn’t stopped scientists in South Korea from using a similar technology to develop the world’s first road-powered electric vehicle network. Located in Gumi city, the 15-mile network uses specially adapted roads with electrical cables lying just underneath the surface to magnetically transfer power to Online Electric Vehicle (OLEV) coaches, charging them whether they are stopped in traffic or swiftly navigating their route.

The technology behind the project was developed by the KAIST Graduate School for Green Transportation as a way to power electric vehicles without using traditional battery storage. While the buses do feature small batteries — around a third of the size of a traditional electric vehicle engine — they are able to rely on a constant source of power that lies 17 centimeters below them. Currently, the city has two OLEVs in operation but plans to add another 10 within the next two years. With only up to 15 percent of the road needing to be replaced to fit the power cables, KAIST’s technology isn’t too invasive but overhead cables are still much easier for city authorities to install. Perhaps the network’s intelligent power system, which uses segment technology to control the supply to OLEV buses and switches it off for other vehicles, will encourage other cities to follow suit.